Symptoms & What You Need To Know About Lyme 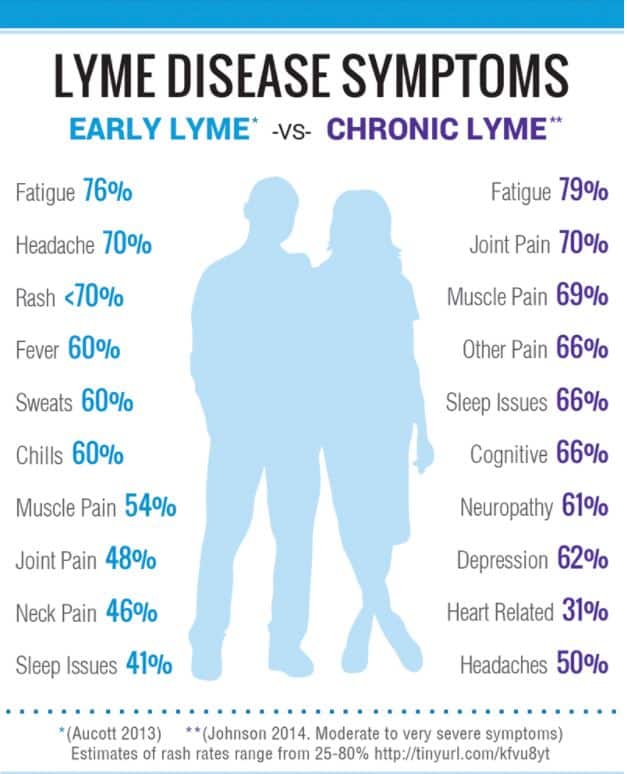 Lyme disease is a multi-systemic illness. Lyme symptoms vary greatly depending on the stage of Lyme Disease and can manifest in many ways. Lyme Disease Symptoms are different for everyone because each person’s immune system reacts differently to it. Lyme patients need to know their symptoms to find the proper Lyme disease treatment.

It is widespread for Lyme patients to go undiagnosed for years, even after countless doctor appointments. However, Lyme disease symptoms come in three stages, with the first stage being the most common.

The initial stage is what is Lyme called “the Three Ts.” They are tiredness, tingling sensations, and twitching muscles. Lyme symptoms may include flu-like symptoms such as fever and chills.

A circular rash known as the “Bull’s Eye” around where you were bit may appear about a week after infection showing reddish bumps on its borders and a pale center area called Erythema migrans (EM). More than 70% of patients might not even notice it or realize they’ve been bitten during this stage because most ticks are so tiny, like poppy seeds! However, if left untreated within weeks, Lyme can persist.

About ten days after being bit by a tick, I became very ill with fever and flu-like symptoms that lasted for 24-48 hours. I thought I caught the flu, not realizing it was the start of Lyme disease. I also had ear ringing, plantar fasciitis, fatigue, and joint pain.

Suppose untreated Lyme can cause other major health issues. Some symptoms that demonstrate Lyme is progressing in the body are facial paralysis, heart problems, and Lyme carditis, which causes inflammation of the lining around your heart.

Lyme disease is also known to mimic many other conditions such as Alzheimer’s’ Disease, Chronic Fatigue Syndrome, Fibromyalgia, etc. These symptoms may progress into more severe problems like arthritis in multiple joints (usually one joint at a time) with pain and swelling that come and go over months or years, as well as neurological problems such as meningitis (inflammation of the membranes around the brain), numbness or tingling in your hands and feet, poor balance, unsteady walking, memory problems including short-term memory loss.

This may also lead to swollen lymph nodes in the neck or groin area. Lyme disease can affect your eyesight by damaging the optic nerve that connects your brain with both of your eyes. Total fatigue, exhaustion, brain fog, depression, anxiety, and insomnia are chronic Lyme symptoms.

Some of the late-stage Lyme disease symptoms are Lyme meningitis and Lyme encephalopathy, which involves memory loss and confusion symptoms.

Lyme carditis is another symptom that may lead to heart failure or irregular heartbeat problems. Because Lyme can penetrate the blood-brain barrier, many doctors believe that Lyme disease is the cause of ALS, Parkinson’s’, and Alzheimer’s’ disease.

Lyme disease is treatable if diagnosed in time, but if left untreated, Lyme Disease can cause permanent damage to your body’s nervous system and other vital organs.

Common Symptoms to Keep In Mind

If you have been experiencing some of these symptoms or believe a tick has bitten you – PLEASE GET TESTED and find a Lyme Literate doctor to talk to! Our Heal podcast is a great resource and contact point! Let us know how we can help by reaching out through our Facebook Lyme Warriors group!