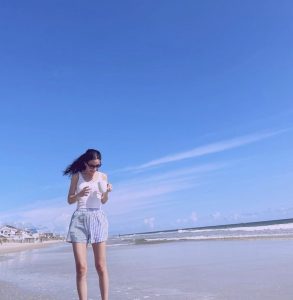 Lyme warrior, social worker, and marketing expert Maria Mooney joined our IG Live series to share her Lyme journey. Maria spent much of her life dealing with undiagnosed symptoms and, after 13 years at the age of 31, was finally diagnosed with Chronic Lyme and began her healing journey.

Her pains and symptoms presented during her running cross-country at the University of Miami. She saw multiple doctors who denied her symptoms or told her she had shin splints and stress fractures. After the burning sensation in her legs prevented her from completing a run, she had to quit. After graduating college, she moved to New Jersey for her Master’s and realized her neurological symptoms were taking over.

She was diagnosed with a progressive neurological disease called RSD, and was told it would only get worse. She now looks back at can pinpoint it as Lyme and co-infections. Maria went the combination of antibiotics and holistic route for treatment and is seeing a specialist in Florida called Dr. Shirley Hartman MD at the Mandarin Wellness Center in Jacksonville, Florida (her contact info). At the time of starting with Dr. Hartman, Maria had 4 co-infections including Epstein-Barr, Babesia, Bartonella.

After her treatments and being house-confined she is now at 80% back to her healthy self. Her advice for newly diagnosed Lyme warriors includes finding ways to clean and detox at home, focusing on mental and emotional health, and taking time to do the research for your own health and advocating.

Maria’s Master’s degree and affinity for research led her to find peer-reviewed articles, symptom connections, and treatment options – something she believes saved her life.

To listen to our previous IG Live interview with Jake Mayers, CLICK HERE